Ketamine : A Multipurpose Agent with Broad Based Therapeutic Uses in Psychiatry and Anaesthesia - A Review

Ketamine's early popularity in general anaesthesia was due to its properties of analgesia, sedation and dissociative anaesthesia. Modern anaesthesia has evolved and newer agents have replaced ketamine and these are now used in everyday practice. Ketamine is used in pain management, procedural sedation, sedation in Intensive Care Units (ICUs) and depression.

Ketamine was synthesized in 1962 and has since the 1970s been used in anaesthesia. It is associated with psychotomimetic side effects that include hallucinations, out of body experiences and nightmares. Other minor side effects are tachycardia, nausea, vomiting and a raised blood pressure. Newer intravenous anaesthetic agents like propofol and inhalational agents desflurane and sevoflurane with pharmacokinetics (absorption, metabolism and elimination) properties and pharmacodynamics (mode of action) more suited to the science of anaesthesia are now commonly use.

Ketamine unique properties has sparked renewed interests. Its use has flourished in domains outside its traditional use as a broad and encompassing anaesthetic agent. This article aims to look at its role in psychiatry and anaesthesia. Ketamine is a mixture of an (r) and (s) enantiomer with the (r)-form having antidepressant effects [1] (Figure 1). 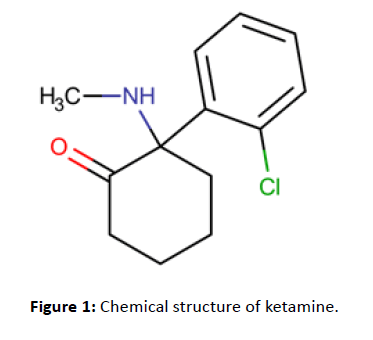 Ketamine has manifold actions. Its antidepressant effects occur through N-Methyl-D-Aspartate (NMDA) receptor antagonism. It increases the amount of glutamate in the spaces between neurons resulting in activation of Amino-hydroxy- Methylisoazol-Propionate (AMPA) receptors; facilitating synaptogenesis and synaptic plasticity [3] in the pre frontal cortex and hippocampus [4]. Chronic stress depletes synapses and ketamine may have a role in the reversal of stress induced damage [4].

The glutamatergic effects of ketamine result in the release of dopamine, as well as the inhibition of the reuptake of serotonin and noradrenaline. These neuro-transmitters influence mood and behaviour and depressive behaviours are improved as is thought patterns and cognition. 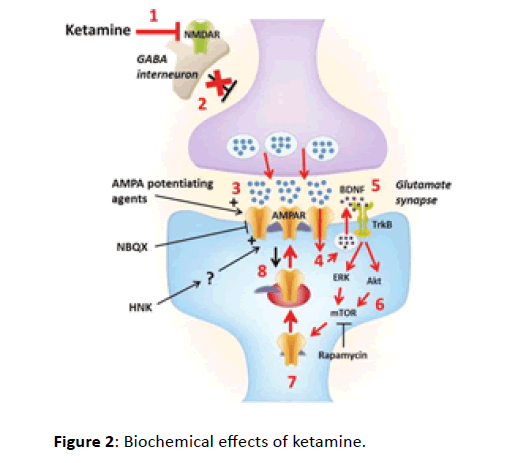 The FDAs approved ketamine for use in major depression and Drug Resistant Depression (DRD) in March 2019. Ketamine use has extended to conditions like post- traumatic stress syndrome, Suicidal Ideation (SI) and depression with anxiety [1].

The patient was a young adult admitted for depression and SI. This was charted on the PHQ-9 which is a self-reporting and a multipurpose instrument used for screening, diagnosing, monitoring and measuring the severity of depression.

He was severely depressed with thoughts of self- harm occurring daily (question 9 of PHQ-9). The patient was treated with Electro Convulsive Therapy (ECT) and responded after 6 ECT sessions. He no longer had suicidal ideation and his depression improved.

He was admitted a year later with a similar history and treatment begun with ECTs and ketamine (0.2 mg/kg) as an adjunct prior to the ECT. No shift in mood occurred and suicidal ideation persisted after 6 ECTs. To prevent cognitive deficit ECTs were discontinued and ketamine infusions at a dose of 0.5 mg/kg over 40 minutes given over a two-week period. Patient responded positively by the 4th infusion clinically and on the (PHQ -9) screen. He was no longer suicidal and his mood disorder improved. A total of 6 infusions were given and he was discharged on chronic medication for a mood disorder.

A middle age lady with severe depression and suicidal ideation chose not to have ECTs. The clinical diagnosis was confirmed on the PHQ-9 self-report questioner. Ketamine infusions at the above recommended dose given [1]. After the third infusion her condition improved with reversal of both her depression and suicidal thoughts. It was seen clinically and as on the (PHQ-9) questionnaire. No further infusions were done and she was discharged on chronic medication for a mood disorder. Reducing anxiety and depressive symptoms improves the ability to function. This is useful in improving mood disorders and preventing suicidality.

Corringer et al [1] in a narrative review of ketamine use as a pre ECT anaesthetic adjuvant concluded that it provided rapid antidepressant effects with maximum efficacy reached at 24 hours and lasting 1-2 weeks post infusion. Safety at the low dose of 0.2 mg/kg was good. There was faster improvements of symptoms and fewer treatments then ECTs alone but the efficacy with ketamine as an adjunct is equivocal and remained overall low.

Wei Zheng et al [5] study looked at the efficacy of ketamine in depression. Illness severity and improvement were measured using the Hamilton scales for depression (HAM-D) and anxiety (HAM-A). A sub anaesthetic dose (0.5mg/kg) was given over 40 minutes. They cited improvement in depression, anxiety and risks of self- harm. The effects were seen within four hours and sustained up to the following infusion. Their series of 99 patients received six infusions of ketamine [1].

Mandal et al [6] study of 25 patients with severe depression received ketamine as single bolus 0.5mg/kg intravenously, having a total of 6 doses over 2 weeks. They report a rapid improvement in depression, anxiety and severity of illness with effects sustained over 1 month.

Ketamine and suicide ideation/ self- harm

Suicidal ideation in depressed individuals is serious and urgent treatment with a rapid response needed. Traditional anti - depressant treatment has a delay of 1-2 weeks to be fully effective. Ketamine treatments as an adjunct to ECT or ketamine infusions alone is a treatment that is useful in preventing further attempts at self-harm. Significant reduction in SI is observed by delivering a dose of 0.5 mg /kg ketamine intravenously over 40 minutes [7]. This has a favourable risk/ benefit ratio [8]. Ketamine can be used in the emergency room after an attempted suicide or self-harm episode. It is easy to administer with effects apparent in a few hours becomes an attractive option. This must be weighed against established therapies such as ECTs [8] and the risks of relapse are to be monitored. The duration of these effects may last for up to a week. Improvements is also seen with intranasal (S) - ketamine in a dose of 84mg. given up to two times a week [1].The American Food and Drug administration (FDA) has approved intranasal ketamine use in conjunction with an oral anti-depressant.

Ketamine as Part of Pre-medication

Children with preoperative anxiety are challenging in terms of anaesthesia. In addition to non-pharmacological techniques such as having a parent present at induction and allay separation anxiety, anxiolytic medication can be helpful. When combined with midazolam (0.25 mg/kg)/2-3 mg/kg ketamine given orally will provides excellent anxiolysis, sedation and analgesia. Parental separation is less traumatic and post-operative behaviour changes more manageable. The unwanted side effects of ketamine can be reduced when combined with midazolam a Gaba-Amino-Butyric-Acid (GABA) receptor agonist. It provides anterograde amnesia, anxiolysis and sedation. Temper tantrums, emergence delirium post anaesthesia and anxiety are better controlled [9]. Parental fears and concerns are also addressed when children are calm and co-operative post anaesthesia.

Opiates are widely used for analgesia for moderate and severe pain. Morphine is the prototype but synthetic analogues more potent such as sufentanil and fentanyl and ultra- short acting agent’s remifentanil are commonly used. Their use can result in Opiate Induced Hyperalgesia (OIH) and is not uncommon with remifentanil. Ketamine NMDA effects prevents sensitization and tolerance to opiates [10]. Ketamine may also be used as part of an opiate sparing technique or as an adjunct to analgesia and anaesthesia. This opioid sparing effect ensures that higher doses of opiates are not required for pain perioperatively and opioid consumption reduced. Ketamine has weak agonist effects at the mu, delta and kappa opiate receptors and a direct effect in modulating pain. The use in sub anaesthetic doses (0.5 mg/kg) pre incision followed by an infusion (0.1-0.2 mg/kg) is used for acute pain management or as part of a Non-Opiate Anaesthesia (NOA) regimen. NOA anaesthesia techniques will include the concurrent use of multiple agents namely intravenous paracetamol, non-steroidal anti- inflammatory drugs and regional/ local anaesthesia. Opiate Free Anaesthesia (OFA) promotes Enhanced Recovery After Anaesthesia (ERAS) and limits opiate overuse peri operatively. The addiction to opioids is a major concern globally [11]. Fentanyl addiction in North America and tramadol in Africa are major threats to the healthcare systems of nations. Ketamine can be combined with lignocaine (1-2 mg/kg), magnesium sulphate (3gms) and dexmedetomidine an alpha 2 agonist having analgesic properties (0.1- 0.8 ug/kg/hr) as part of OFA during surgery. This can be especially useful in the elderly and in opiate naive patients where the risks of using opiates outweighs its benefits [11]. Opioids cause respiratory depression, delayed emergence and prolonged recovery time following anaesthesia. These added costs impact on medical resources and limited budgets.

Infusions of dexmedetomidine with sub-anaesthetic doses of ketamine (0.5 mg/kg/hr) can be used for patients requiring ventilation and sedation in ICU. A contraindication for this use is raised intracranial pressure. The unwanted side effects of commonly used agents like morphine and midazolam are avoided. Morphine causes bradycardias, constipation, nausea and vomiting and in combination with midazolam may compound the delirium seen in ICU patients. When these effects and the added respiratory depression of opioids are avoided, weaning from ventilation is facilitated [12].

There are safety issues in high- risk areas for anaesthesia. These are designated areas used for gastro- endoscopic procedure such as gastroscopies and colonoscopies, and in cardiac procedure rooms for Trans-Esophageal Echocardiograms (TEE). They are often located in isolated areas lacking appropriate equipment and support staff. Procedural sedation in radiology suites is another such area where scanning and Magnetic Resonance Imagining (MRI) studies are often done. Sedation with infusions of a sub anaesthetic ketamine (0.5 mg/kg/hr) can be combined with propofol sedation (0.1-0.5 mg/kg/min) or dexmedetomidine following proper risk assessment, appropriate monitoring and a dedicated sedationist present. The onset of action of ketamine occurs in 30-60 seconds following an intravenous dose and is distributed to the brain and other highly perfused tissues. It has an elimination half-life of 2-4 hrs [1]. Airway reflexes are preserved and the risk respiratory depression is minimal. Combined with dexmedetomidine which can cause hypotension and bradycardia, ketamine stimulatory effect on heart rate and blood pressure will ensure hemodynamic stability and further augment the sedative effects of dexmedetomidine.

Combination pain therapy with multiple agents is effective in the management of post-operative pain. A multimodal approach using local anaesthesia, anti-inflammatories, steroids, paracetemol and ketamine is good practice in acute pain conditions which is the result of acute tissue injury. It can be used as patient-controlled analgesia (PCA) protocols and as an adjunct to opioids in acute pain [13].To prevent the transition of acute to chronic pain, NOA infusions can be used with less potent opiates (Tramadol) for the effective management of moderate to severe pain. Non pharmacological therapies can be incorporated including include heat therapy, water therapy, physiotherapy and early mobilization to maintain muscle strength and prevent deconditioning These modalities all have a role in effective pain management and prevent the transition to chronic pain states.

The pathophysiology in this condition is central sensitization and differs from acute pain. Ketamine reverses central sensitization and enhances descending pathways that modulate pain pathways [14]. The American Society of Anesthesiology (ASA) recommends the use of ketamine infusions in Chronic Regional Pain Syndrome (CRPS), chronic and episodic cluster headaches [15], and fibromyalgia.

Ketamine has seen resurgence in its use. It is a multipurpose agent with new and exciting therapeutics for psychiatry and anaesthesia. It is readily available and cost effective; however its therapeutic uses have addictive potential. Urological toxic effects have also been described with its unregulated use. The needed precautions with checks and balances will prevent misuse as newer frontiers are explored. Professional bodies are to give guidance to the innovative use of ketamine, its drawbacks and endorse reports of efficacy trials with robust evidence. 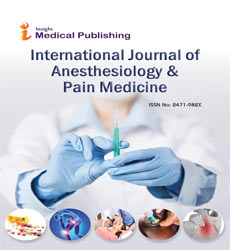